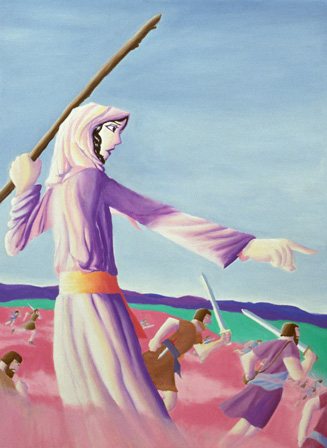 Key Verse: "And she said, I will surely go with thee: notwithstanding the journey that thou takest shall not be for thine hour; for the LORD shall sell Sisera into the hand of a woman. And Deborah arose, and went with Barak to Kedesh." (Judges 4:9)

The Book of JUDGES

4:1 And the children of Israel again did evil in the sight of the LORD, when Ehud was dead.

4:2 And the LORD sold them into the hand of Jabin king of Canaan, that reigned in Hazor; the captain of whose host was Sisera, which dwelt in Harosheth of the Gentiles.

4:4 And Deborah, a prophetess, the wife of Lapidoth, she judged Israel at that time.

4:5 And she dwelt under the palm tree of Deborah between Ramah and Bethel in mount Ephraim: and the children of Israel came up to her for judgment.

4:6 And she sent and called Barak the son of Abinoam out of Kedeshnaphtali, and said unto him, Hath not the LORD God of Israel commanded, saying, Go and draw toward mount Tabor, and take with thee ten thousand men of the children of Naphtali and of the children of Zebulun?

4:7 And I will draw unto thee to the river Kishon Sisera, the captain of Jabin's army, with his chariots and his multitude; and I will deliver him into thine hand.

4:9 And she said, I will surely go with thee: notwithstanding the journey that thou takest shall not be for thine honor; for the LORD shall sell Sisera into the hand of a woman. And Deborah arose, and went with Barak to Kedesh.

4:10 And Barak called Zebulun and Naphtali to Kedesh; and he went up with ten thousand men at his feet: and Deborah went up with him.

4:11 Now Heber the Kenite, which was of the children of Hobab the father in law of Moses, had severed himself from the Kenites, and pitched his tent unto the plain of Zaanaim, which is by Kedesh.

4:12 And they shewed Sisera that Barak the son of Abinoam was gone up to mount Tabor.

4:13 And Sisera gathered together all his chariots, even nine hundred chariots of iron, and all the people that were with him, from Harosheth of the Gentiles unto the river of Kishon.

4:14 And Deborah said unto Barak, Up; for this is the day in which the LORD hath delivered Sisera into thine hand: is not the LORD gone out before thee? So Barak went down from mount Tabor, and ten thousand men after him.

4:15 And the LORD discomfited Sisera, and all his chariots, and all his host, with the edge of the sword before Barak; so that Sisera lighted down off his chariot, and fled away on his feet.

4:16 But Barak pursued after the chariots, and after the host, unto Harosheth of the Gentiles: and all the host of Sisera fell upon the edge of the sword; and there was not a man left.

4:18 And Jael went out to meet Sisera, and said unto him, Turn in, my lord, turn in to me; fear not. And when he had turned in unto her into the tent, she covered him with a mantle.

4:19 And he said unto her, Give me, I pray thee, a little water to drink; for I am thirsty. And she opened a bottle of milk, and gave him drink, and covered him.

4:20 Again he said unto her, Stand in the door of the tent, and it shall be, when any man doth come and enquire of thee, and say, Is there any man here? that thou shalt say, No.

4:21 Then Jael Heber's wife took a nail of the tent, and took an hammer in her hand, and went softly unto him, and smote the nail into his temples, and fastened it into the ground: for he was fast asleep and weary. So he died.

4:22 And, behold, as Barak pursued Sisera, Jael came out to meet him, and said unto him, Come, and I will shew thee the man whom thou seekest. And when he came into her tent, behold, Sisera lay dead, and the nail was in his temples.

4:23 So God subdued on that day Jabin the king of Canaan before the children of Israel.

4:24 And the hand of the children of Israel prospered, and prevailed against Jabin the king of Canaan, until they had destroyed Jabin king of Canaan.

5:1 Then sang Deborah and Barak the son of Abinoam on that day, saying,

5:2 Praise ye the LORD for the avenging of Israel, when the people willingly offered themselves.

5:3 Hear, O ye kings; give ear, O ye princes; I, even I, will sing unto the LORD; I will sing praise to the LORD God of Israel.

5:4 LORD, when thou wentest out of Seir, when thou marchedst out of the field of Edom, the earth trembled, and the heavens dropped, the clouds also dropped water.

5:6 In the days of Shamgar the son of Anath, in the days of Jael, the highways were unoccupied, and the travelers walked through byways.

5:7 The inhabitants of the villages ceased, they ceased in Israel, until that I Deborah arose, that I arose a mother in Israel.

5:8 They chose new gods; then was war in the gates: was there a shield or spear seen among forty thousand in Israel?

5:9 My heart is toward the governors of Israel, that offered themselves willingly among the people. Bless ye the LORD.

5:10 Speak, ye that ride on white asses, ye that sit in judgment, and walk by the way.

5:14 Out of Ephraim was there a root of them against Amalek; after thee, Benjamin, among thy people; out of Machir came down governors, and out of Zebulun they that handle the pen of the writer.

5:15 And the princes of Issachar were with Deborah; even Issachar, and also Barak: he was sent on foot into the valley. For the divisions of Reuben there were great thoughts of heart.

5:16 Why abodest thou among the sheepfolds, to hear the bleatings of the flocks? For the divisions of Reuben there were great searchings of heart.

5:17 Gilead abode beyond Jordan: and why did Dan remain in ships? Asher continued on the sea shore, and abode in his breaches.

5:18 Zebulun and Naphtali were a people that jeoparded their lives unto the death in the high places of the field.

5:19 The kings came and fought, then fought the kings of Canaan in Taanach by the waters of Megiddo; they took no gain of money.

5:20 They fought from heaven; the stars in their courses fought against Sisera.

5:21 The river of Kishon swept them away, that ancient river, the river Kishon. O my soul, thou hast trodden down strength.

5:24 Blessed above women shall Jael the wife of Heber the Kenite be, blessed shall she be above women in the tent.

5:25 He asked water, and she gave him milk; she brought forth butter in a lordly dish.

5:26 She put her hand to the nail, and her right hand to the workmen's hammer; and with the hammer she smote Sisera, she smote off his head, when she had pierced and stricken through his temples.

5:28 The mother of Sisera looked out at a window, and cried through the lattice, Why is his chariot so long in coming? why tarry the wheels of his chariots?

5:29 Her wise ladies answered her, yea, she returned answer to herself,

5:31 So let all thine enemies perish, O LORD: but let them that love him be as the sun when he goeth forth in his might. And the land had rest forty years.